3 things Jay-Z and Samsung got right 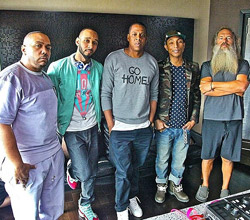 If you were looking at last nights, Game 5 of the 2013 NBA Finals between the Miami Heat and the San Antonio Spurs, you may have noticed a three-minute commercial that supports the new partnership between Hip-Hop Mogul/Entrepreneur, Jay-Z and electronics giant, Samsung.  Over the past couple of hours, I have heard and read chatter on opinions of the piece; but you have to admit, this promotional campaign’s launch is a success.  No matter your thoughts, the campaign illustrates three points every great promotion needs….team work, addressing customers’ needs and creating a lot of buzz.

In 2006, I heard a keynote address from Randall Pinkett, CEO, Rhodes Scholar and Season 4 Winner of the Reality Show, The Apprentice highlighting the need for brands and entrepreneurs to re-think their business model and form partnerships to compete and succeed in the global market of tomorrow.  I’m paraphrasing his comments, but he stated that organizations should partner for the following reasons…

If you examine the partnership between Jay-Z and Samsung, their team-work possibilities are huge…

Team Work is the foundation of this entire campaign.

Yes, we do live in a high-speed interactive world.  Yes, consumer’s want gratification.  So, what’s new?  Glad you asked; I would be happy to tell you.  Consumer’s need for gratification has increased significantly; they want more FREE stuff and they want fast and accurate information.  And that is exactly what this promotional campaign easily delivers to customers…FREE Stuff and Content.

This point is probably an understatement for this campaign.  Just place MagnaCarta, Jay-Z or Samsung in your search engine.  Every broadcast outlet, print media and blogger imaginable is talking about this campaign; not to mention, the social media chatter… simple & quietly stated, this campaign is viral!  This campaign was launched during   Game 5’s halftime show.  Official viewership numbers have not been released yet, but over 18,000,000 household watched last year’s Game 5.  I’m sure this year’s numbers will be similar since Miami is trying to RE-PEAT as NBA Champs.  The BUZZ on this promotion; like it or not, is enormous.  And in the end, that is what you want to accomplish with your promotions…enthusiastic fans and great buzz.  You may not be able to obtain the high profile partnership and you may not have the financial resources to advertise during the NBA Finals; but that is ok, you work with what you got….

The rest is all in the planning, execution and delivery of your campaign.

Posted by #govividteam  |  Comments Off on 3 things Jay-Z and Samsung got right  |  in Promotional Campaign
Contact Form Powered By : XYZScripts.com